Bitcoin has continued with its bullishness as it surged its price above the USD$23,000 level, a positive signal amid miners reduced the sales of their mined coins. On-chain flows flagged by Bitifinex analysts indicate that the amount of Bitcoin moved from Bitcoin mining addresses to wallets owned by cryptocurrency exchanges has declined to multi-year lows. 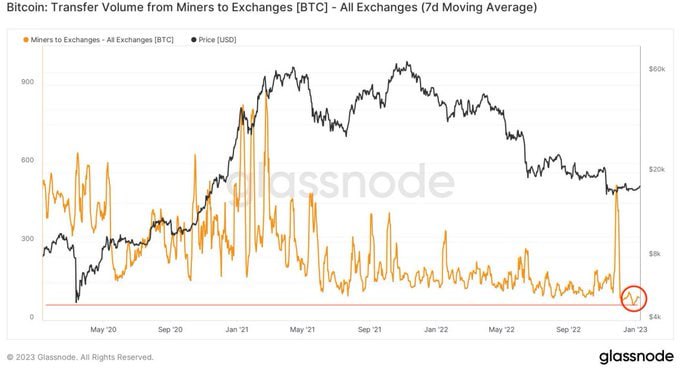 As per a Bitfinex analyst, Bitcoin miner sales are at a three-year low. The report claims that the selling could be a sign that Bitcoin miners are in the mood to accumulate coins as they expect the surge of prices of the flagship cryptocurrency.

The declined Bitcoin sales from mining companies mean low selling pressure from these market actors. Therefore, it signals bullishness for the broader market.

The analysts, however, stated that the recent uptick in Bitcoin price might witness a correction as investors try to recoup their profits amid the current price surges.

The analysts identified large wallet sizes (>$1M) as the majorly responsible for accumulating Bitcoin. They further said such wallets, as well as major market actors, are the ones creating the buying pressure that comes after the FTX saga and a series of bearish events generally witnessed last year.

The analysts mentioned that since the second week of January, the numbers of wallets with $1,000 and $10,000 worth of Bitcoin have increased. The analyst further acknowledged that the trading activities of retail investors had accompanied the uptrend.

According to the figure above, the current low Bitcoin selling pressure coincided with the lowest sales in November last year. The current low level signals a green (bullish) indicator for the cryptocurrency.

When miners sell more BTC, it implies a bearish for the coin value. Conversely, when mining firms don’t have the selling urge, this suggests a bullish trend for the crypto market.

Bitcoin has surged its value by almost 40% this month, trading at $22,909, up 1.48% on Tuesday. The crypto is trading at levels not witnessed since the downfall of the FTX exchange. BTC volume stands at about $26.82 billion, an increase of 12.78% in the past 24 hours, as per Coinmarketcap.

BTC price is moving sideways on the 4-hour chart. Source: BTC/USDT on TradingView.com

As highlighted above, the rise in Bitcoin value could be attributed to whales committed to accumulating coins amid surging prices. The bullish trend is also seen in the global crypto market capitalization, which is trading at a higher level, around $1.06 trillion, up 1.27% in the last 24 hours, according to Tradingview.