Amidst all of the hustle and bustle surrounding the reorganization of Twitter and the revelations of the “Twitter Files,” Elon Musk took the time a few hours ago to fix a pressing problem for the Dogecoin community.

In recent days, Musk had declared war on the spam bots on Twitter. In doing so, the algorithm and the Twitter team may have been a bit too harsh.

Musk Stands By For The DOGE Community

A whole bunch of accounts of people who, as far as I know, generally don’t do anything but tweet memes and positivity are being suspended. Pretty weird man.

Twitter CEO Elon Musk, who through a representative is part of the Dogecoin Foundation’s five-member advisory team alongside Markus and Vitalik Buterin, responded to the tweet within three hours.

Musk wrote that his Twitter team had been a bit too aggressive with the suspension of spam bot accounts. “Team was a bit too intense with spam/bot suspensions. Moving to chill mode,” Musk replied.

Dogecoin founder Markus then confirmed that the accounts have been reactivated “Welcome back Doge accounts. ty @elonmusk,” Markus added.

Remarkably, this wasn’t the only incident where Elon Musk showed his love for Dogecoin over the last weekend. According to Matt Wallace, Elon Musk was spotted on Saturday wearing a black Dogecoin t-shirt, displaying the mascot of DOGE, a Shiba Inu wearing a cowboy hat and sunglasses.

The Dogecoin (DOGE) price initially showed no reaction to Elon Musk’s tweet. This is unusual, as Musk usually triggers a small or large rally with every tweet about the meme coin. However, nothing happened in the first hour after the tweet.

This has changed in the last couple of hours. The DOGE price rose to $0.1118 at one point, recording an increase of around 7.5% within an hour.

However, the FOMO quickly flattened out. DOGE was trading at $0.1076 at press time, still posting a gain of around 4% over the past 24 hours.

The move has bounced off the important $0.11 resistance zone again. For DOGE it is already the fourth rejection within the last month at this mark. The price had fallen below it on November 7.

To initialize a stronger upward movement towards the zone between $0.135 and $0.14, DOGE needs to overcome the key resistance at $0,11 in the 4-hour chart. 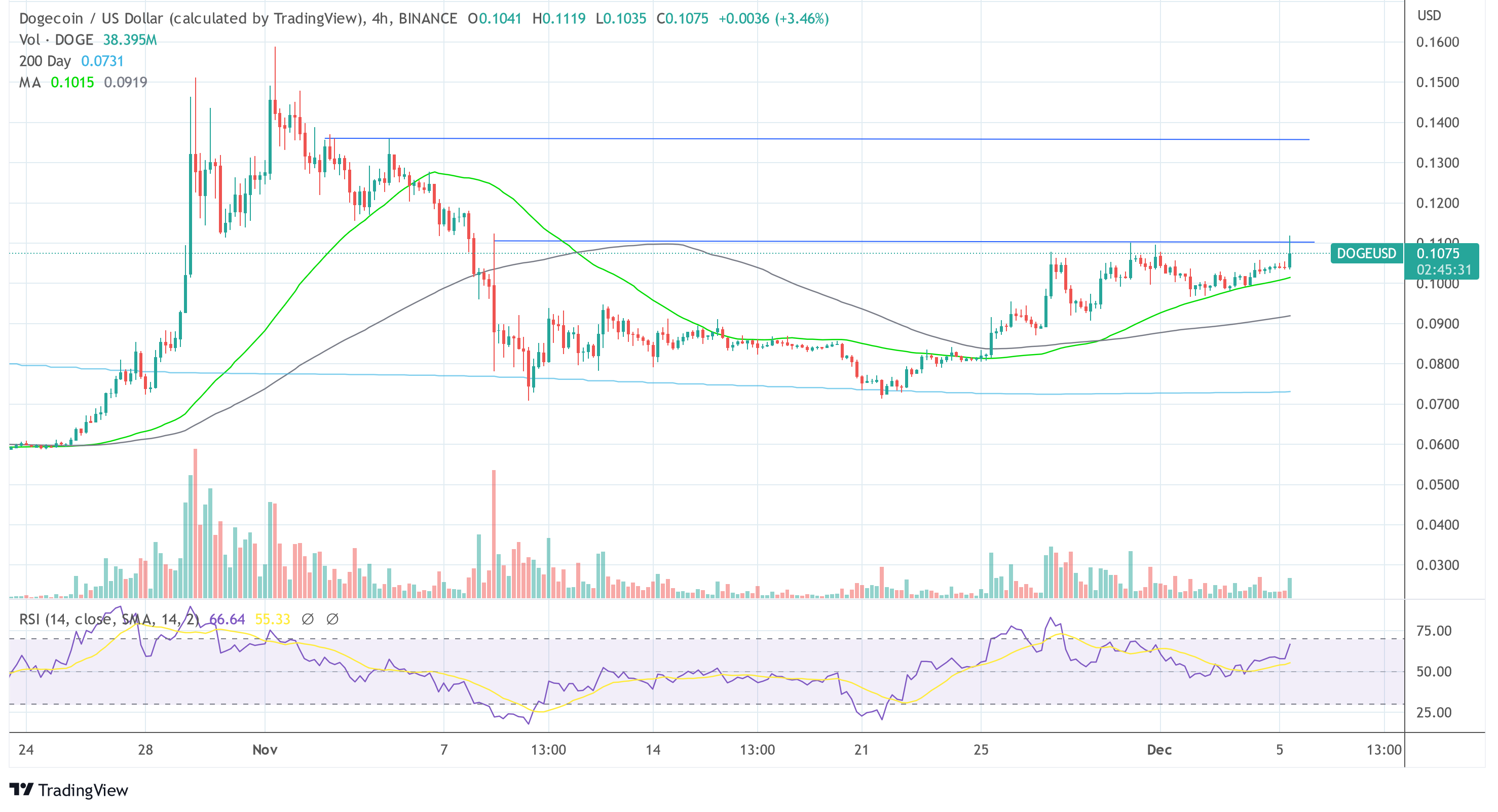