FTX Collapse Hurts Investor Confidence, Why These Companies Will Profit

The collapse of the second crypto exchange, FTX, may become one of the most traumatic episodes for the nascent asset class. However, as is often the norm in financial markets, the losses for one party implied profits for another.

According to a report from Similarweb, cold wallet and hardware wallet companies, equipment that allows users to custody their digital assets, are seeing benefits. Currently, people’s confidence in centralized exchanges (CEXs) is declining, and more users want to take control of their crypto.

After the events of last week, many investors are advocating for decentralized solutions to trade digital assets, emphasizing educating users to safeguard their assets with a cold wallet. The motto on crypto social media is “not your keys, not your coins.”

In this context, organic searches for cold wallets are skyrocketing. The report from Similarweb indicates that searchers for Ledger rose from 100,000 daily views to over 300,000 in the wake of FTX’s collapse. As seen in the chart below, the search traffic for Ledger.com tripled in a short period. 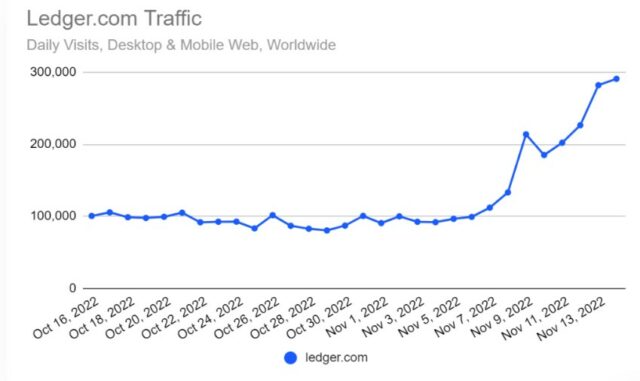 In addition to Ledger, Trezor, another hardware wallet company, is seeing an uptick in its traffic. These two companies dominate the trend and commend the majority of cold wallet searches.

The report noted that 98.8% of the traffic is organic, with 77% of the searchers tagged as “branded.” In other words, people are purposely looking for these companies. This trend speaks miles about the current lack of confidence in the industry and which companies are perceived as trustworthy.

This spike in traffic has been translating into revenue for Ledger and Trezor. The report cites a statement from Pascal Gauthier, CEO at Ledger. The executive said:

Last week saw Ledger’s highest sales week in history. Sunday was our single highest day of sales ever. Until Monday, when we beat our all-time high again. The message is clear: people are realizing that we must return to decentralization and to self-custody. ‘Not your keys, not your coins.’ A saying as old as crypto itself, but it has never been more relevant.

In an interview with Bitcoinist, the CTO of Bitfinex Paolo Ardoino spoke about the importance of self-custody. The executive highlighted that exchanges have a responsibility to educate their users. Ardoino said:

We are at the same situation of the ICO (Initial Coin Offering) era. And we have to put even more effort to regain the trust of the users and educate them on how to properly keep their funds under their own custody. So, really it is a complex process that requires energy that should be better invested in Bitcoin adoption. Yet we have to fight the fight to show that not everyone in the space is the same (as Sam Bankman-Fried). There are bad actors and good actors.