What Does Puell Multiple Say About Current Bitcoin Bear?

Puell multiple is an indicator that has historically given hints about previous Bitcoin cycles, here’s what it says about the current bear market.

According to the latest weekly report from Glassnode, miners are currently raking in just 63% of the revenues of last year.

The “puell multiple” is a metric that measures the ratio between the current Bitcoin miner revenues, and the 365-day moving average of the same.

What this indicator tell us is how the miner revenues right now compare with the average during the last year.

When the value of the multiple is greater than 1, it means miners are earning more currently than the average for the past 365 days.

On the other hand, the metric having values lesser than the threshold suggests miner incomes are lower at the moment.

Now, here is a chart that shows the trend in the Bitcoin puell multiple over the last few years: 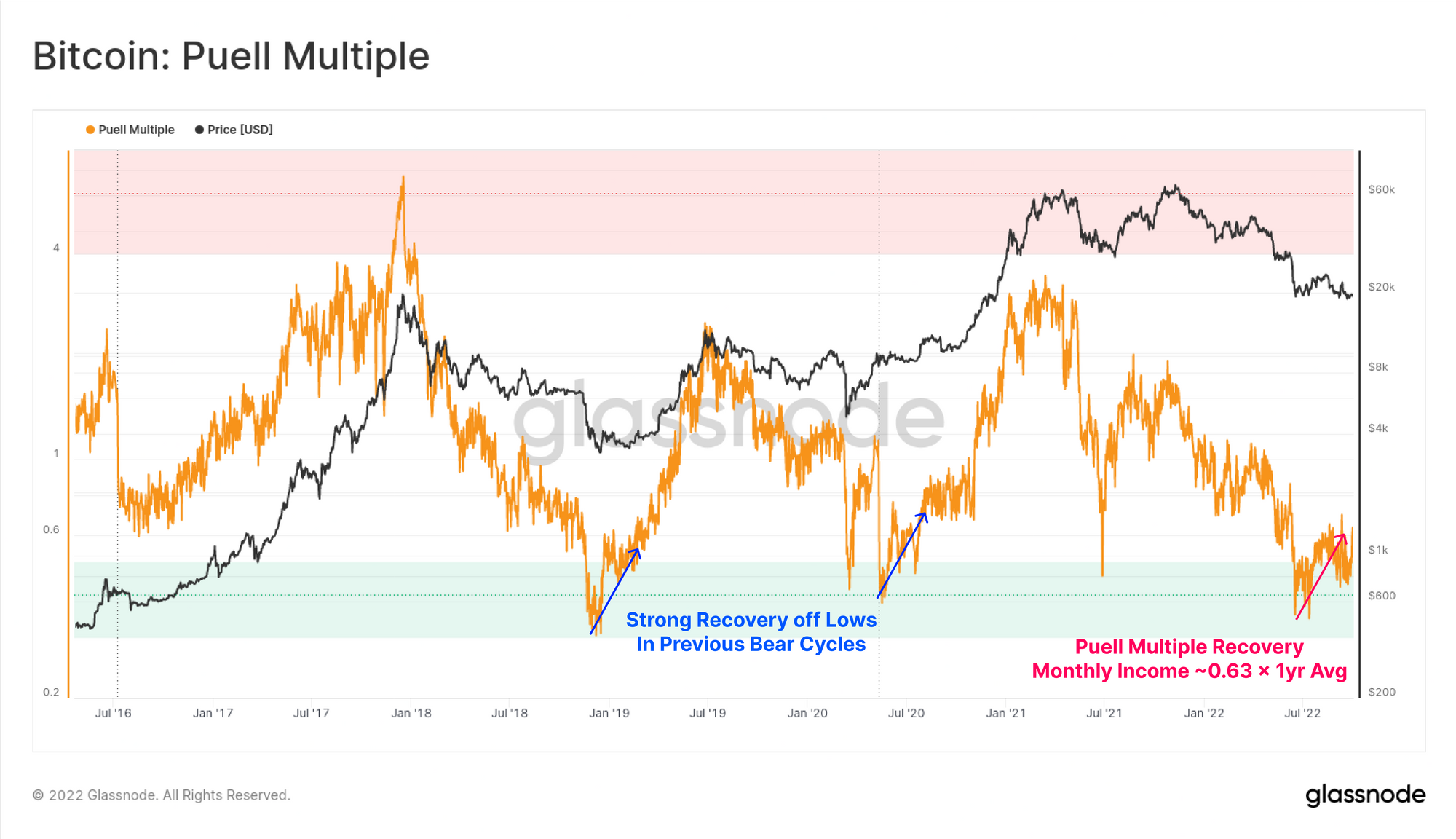 Looks like the value of the metric has been showing a rise in recent weeks | Source: Glassnode's The Week Onchain - Week 40, 2022

As you can see in the above graph, the historical zones for the Bitcoin puell multiple are highlighted. It seems like during the past cycles, the indicator dipping below the 0.5 value resulted in bottom formation.

After the metric hit the low during the previous bear markets and subsequently recovered out of the zone, the crypto also observed the end of the bear and the start of a fresh bull run.

The likely reason behind this trend is that when miners reach very low revenues, they go through a capitulation phase and once it ends, the selling pressure from them subsides, thus the price observes some growth.

It looks like back in June of this year, the metric hit a low of just 0.33, implying that miners were earning only 33% of the average for past year at that point.

Since then, however, the multiple has enjoyed an overall trend and has escaped out of the historical bottom zone as its value is now 0.63. This means that miners are under much less stress now compared to just a few months ago.

If history is anything to go by, the current uptrend in the Bitcoin puell multiple could spell the end of the bear market.

At the time of writing, Bitcoin’s price floats around $20k, up 4% in the past week.

The value of the crypto seems to have spiked up over the past day or so | Source: BTCUSD on TradingView Featured image from Maxim Hopman on Unsplash.com, charts from TradingView.com, Glassnode.com
thumb_up thumb_down
0 like 0 dislike
reply