Dogecoin has been rallying over today’s trading session, following the general sentiment in the market and receiving support from its biggest advocate Elon Musk. The entrepreneur and CEO of Tesla and SpaceX confirmed a deal to purchase social media Twitter (TWTR)

Elon Musk was about to enter into a legal battle with social media; the entrepreneur announced a deal to purchase the company early in 2022 but refused to see it through due to some alleged false data on Twitter’s number of users.

According to several reports, Elon Musk sent a letter to Twitter confirming the original offers of $44 billion or $55 per share to take over the company. As seen in the chart below, the Elon Musk-Twitter controversy has been a major driver in TWTR’s price action.

The stock’s trading has been halted during today’s trading session, after a roller-coaster year that took TWTR from a high of around $55 to a low of $35. 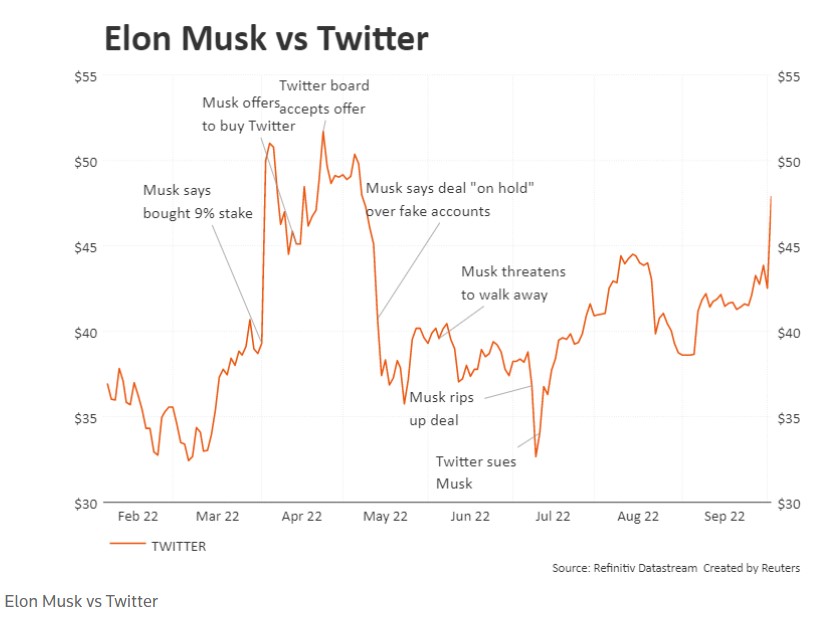 The news about the Musk-Twitter deal came at a seemingly right time for Dogecoin, the cryptocurrency was already moving to the upside with Bitcoin and large cryptocurrencies. However, the latter has been losing steam and could be gearing up for a re-test of previous support levels.

In the meantime, Dogecoin records an 8% profit over today’s trading session leading to a spike in volatility and an increase in its bullish momentum, as seen in the chart below. Dogecoin has finally broken out of a tight range and it is reclaiming an important region at $0.064.

For a while, Musk-related news has driven Dogecoin’s price action. The CEO at Tesla has been a defender of the memecoin. Today’s event triggered two massively bullish factors for the cryptocurrency, according to research firm Santiment.

As the Musk-Twitter deal was confirmed the memecoin saw a spike in the number of transactions related to large players and big funds. As the price traded to the upside, Santiment recorded no spike in funding rates, unlike in previous rallies.

In other words, traders were not taking highly leveraged positions. In that sense, the research firm wrote the following on the cryptocurrency’s potential short term.

Beyond large players taking a side in Dogecoin’s price action, there is potential for this Musk-Twitter deal to become permanently bullish for the memecoin. The social has been embracing crypto and adding blockchain-based features.

The platform allows its users to set non-fungible tokens (NFTs) as profile pictures, and to use a Bitcoin or Ethereum transaction to receive tips from their followers. In the coming months, as the deal materializes, Musk could include Dogecoin as of the few cryptocurrencies supported by Twitter and boost its adoption levels.