Bitcoin finally sees some relief after a start of 2022 with relentless selling pressure. The first crypto by market cap trades at $36,815 with a 9.6% profit in 24 hours.

BTC trends to the downside in the 4-hour chart. Source: BTCUSD Tradingview

Related Reading | Bitcoin Supply Shock: Only 12% Of BTC Supply Is On Exchanges Now

Bitcoin is moving towards a 1:1 correlation to the U.S. Stock Market, in the short term, according to Bloomberg Intelligence’s Senior Commodity Analyst Mike McGlone. The crypto market has been reacting to the potential shift in the U.S. Federal Reserve monetary policy.

The financial institution has hinted at an increase in its interest rates to, at least, a 0.25% in 2022’s Q1 and a tapering of their asset purchase. The goal is to stop inflation as the CPI stands at a 40 year high. This has translated into a selloff which begun in Q4, 2021.

In addition, investors seem to be trying to get ahead of a potential hike in interest rates, a thesis which could receive confirmation tomorrow during the FED’s Federal Open Market Committee (FOMC). If the institution hints a tougher shift, Bitcoin could retest its critical support level at $33,000.

In expectation of this and other events, investors could be sitting in cash, waiting to bid on BTC when the economic outlook looks clearer. In other words, the demand is low for risk assets and could remain as such for the near future.

Analyst John Nash believes the FOMC meeting is already priced in with a “too early” reversal in Bitcoin and other cryptocurrencies. However, Nash expects to see a stronger bounce towards $40,000, before BTC’s price dives back into the $25,000 to $28,000 range.

At present, Bitcoin must flip $36,000 and $38,000 from local resistance into support to continue it moves towards $40,000. After, Nash believes investors should follow the old adagio but with a twist: “Buy in May and go away”.

On this note, he seems to concur with McGlone. The Bloomberg expert has been bullish on Bitcoin and cryptocurrencies on current market conditions. In fact, he expects the upcoming economic shift to provide the digital asset sector, at least for BTC and ETH, with legitimacy. He wrote:

Price reversion in cryptos is likely to spread in 2022, after the assets were a poster child of speculative inflationary excess in 2021, but Bitcoin stands to come out ahead. 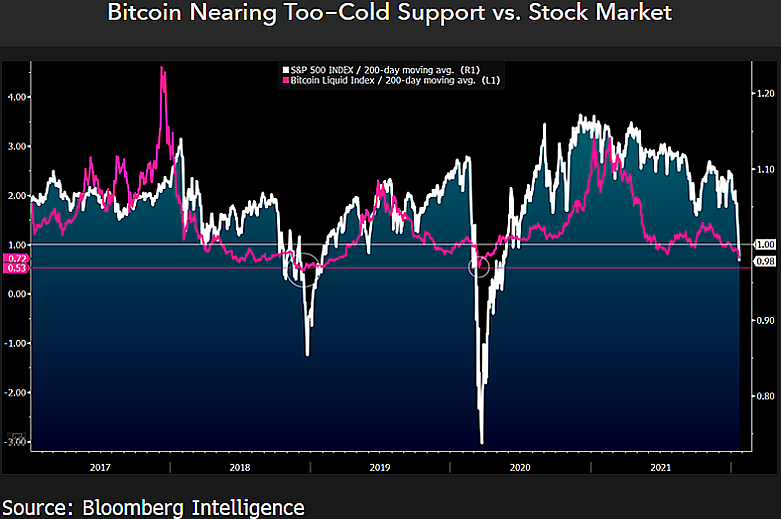 Other analysts expect some similar with BTC tracking the traditional market, but progressively decoupling as it shows more strength during times of weakness for stocks. Recently, as pointed by pseudonyms analyst MacroScope, the first crypto by market cap has briefly decouple from stock futures. The analyst said:

No secret BTC has become a risk-on asset closely linked to stocks. But as stocks take a hit, keep watch for a possible decoupling. Could be gradual or sharp. A few scenarios are possible (longer tweet). If it happens, would be “shot heard ’round the world” for macro managers.