Is Bitcoin On The Ropes? Indonesia’s CBDC Aims To Give A Fight

As Bitcoin has been declared ‘haram’ in Indonesia and the country’s Central Bank considers issuing a digital rupiah, an official suggested in the parliament that a central bank digital currency (CBDC) would be instrumental in fighting the threat that cryptocurrencies’ trading represents for the banks and fiat money. This is shared thought with other central banks who are also building new digital models, such as China’s and Russia’s.

During a fit-and-proper test for deputy governor, the assistant governor of Bank Indonesia, Juda Agung, said that the trading of crypto assets has an impact on the financial system, and considers it is the central bank’s position to fight the threat many officials fear, a Bloomberg report shows.

“A CBDC would be one of the tools to fight crypto. We assume that people would find CBDC more credible than crypto. CBDC would be part of an effort to address the use of crypto in financial transactions,”

In May, Indonesia’s central bank first announced they had started to examine issuing a CBDC “as a legal digital payment instrument in Indonesia,” given that cash is losing popularity and their data showed the frequency of digital payments transactions had soared 60.3% by April compared to the previous year, and 46% in terms of value hitting 3,114.1 trillion rupiahs ($217.4 billion), Reuters reported.

This data alarmed the bankers to build a path towards the digital economy and not be left behind, but they didn’t announce a clear timeline for this plan. However, the governor made a note on reminding the only currency allowed in Indonesia for payment transactions is the rupiah, and the CBDC would be regulated just like banknotes and card-based transactions.

Crypto Is Banned For Muslims

These events are accompanied by a rough path of discussions carried by scholars around banning cryptocurrencies in Indonesia, the country with the largest population of Muslims.

The resolutions have had many reactions from Muslims -7.5 million Indonesians had invested in cryptocurrencies by July, seeing a transaction value of 478.5 trillion rupiahs ($33 billion)-, who opposed the idea of the ban and asked to reconsider in many opportunities.

Even so, The National Ulema Council recently declared the use of cryptocurrencies are ‘haram’ or banned by Islam law, as scholars have claimed it does not represent “an honest work” and compared it to illegal activities.

Overall, banks and regulators among the world fear the increasing popularity of crypto assets -more than they fear the critics they tell the public- as they feel overpowered. The idea of giving a “fight” through issuing a CBDC has been voiced by others before, but the question is raised whether the digital rupiah under consideration can offer enough tools to drive attention away from Bitcoin and other digital assets.

At which point of the so-called digital economy revolutions does the importance of fiat money ends and the bank’s propaganda starts?

Can They Sucker Punch? Bitcoin Does Not Fear

One of the main reasons many central banks around the world are insisting on issuing CBDCs is to create an alternative to Bitcoin and other cryptocurrencies, in fears of finding themselves overthrown and rapidly losing popularity.

However, can CBDCs offer something that can actually become a better option than Bitcoin for its many enthusiasts? Can we even call it a “fight” the role that Indonesia’s central bank would be playing?

Bitcoin’s throne has been built on elements the central banks lack. As much as its volatility is criticized by governments and banks, traders benefit from it. On top of that, there is anonymity, innovation, and the strong stilt of decentralization: no third parties all welcome.

The Bitcoin movement carries a weight of ethics and ideals, a general apathy against the current financial system and models, with the banks -and fiat money- as the front cover.

As many would probably use CBDCs as a payment method, Bitcoin investors, traders, and enthusiasts are not likely to stop BTC transactions or turn down the asset over a not-so-revolutionary change of the central bank’s model. 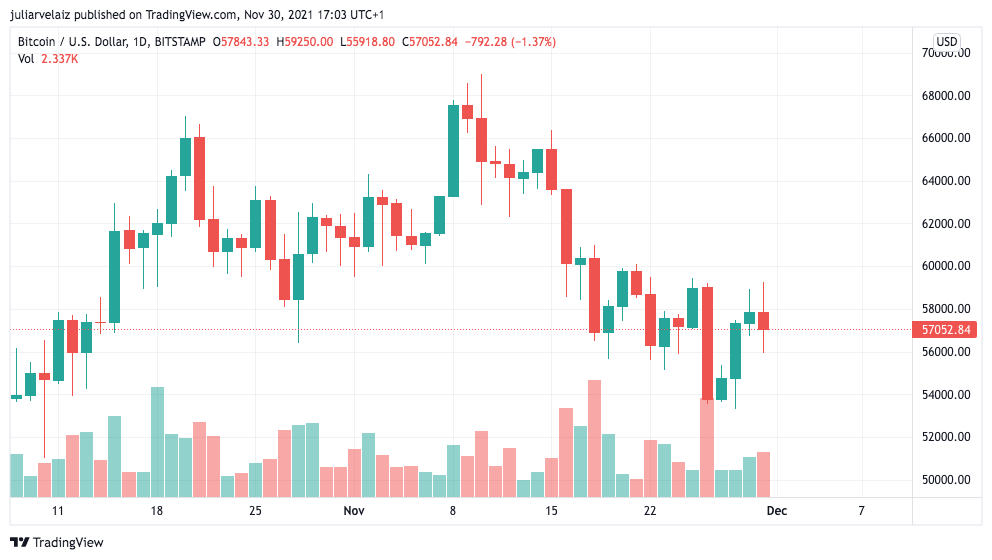 Bitcoin trading at $57,052 in the daily chart | Source: BTCUSD on TradingView.com
thumb_up thumb_down
0 like 0 dislike
reply