First spotted by pseudonymous analyst Bit Harington, the bullish setup drew its inspirations from Bitcoin's secular bull runs every time after halvings when the miner block reward gets cut in half. Analysts perceive the halving as a bullish event, which reduced the supply of newly mined BTC.

Harington reminded that Bitcoin's prices surged by more than 600% after the first two halving events in 2012 and 2016 when measured from a so-called resistance/support (R/S) line, as shown in the chart below. 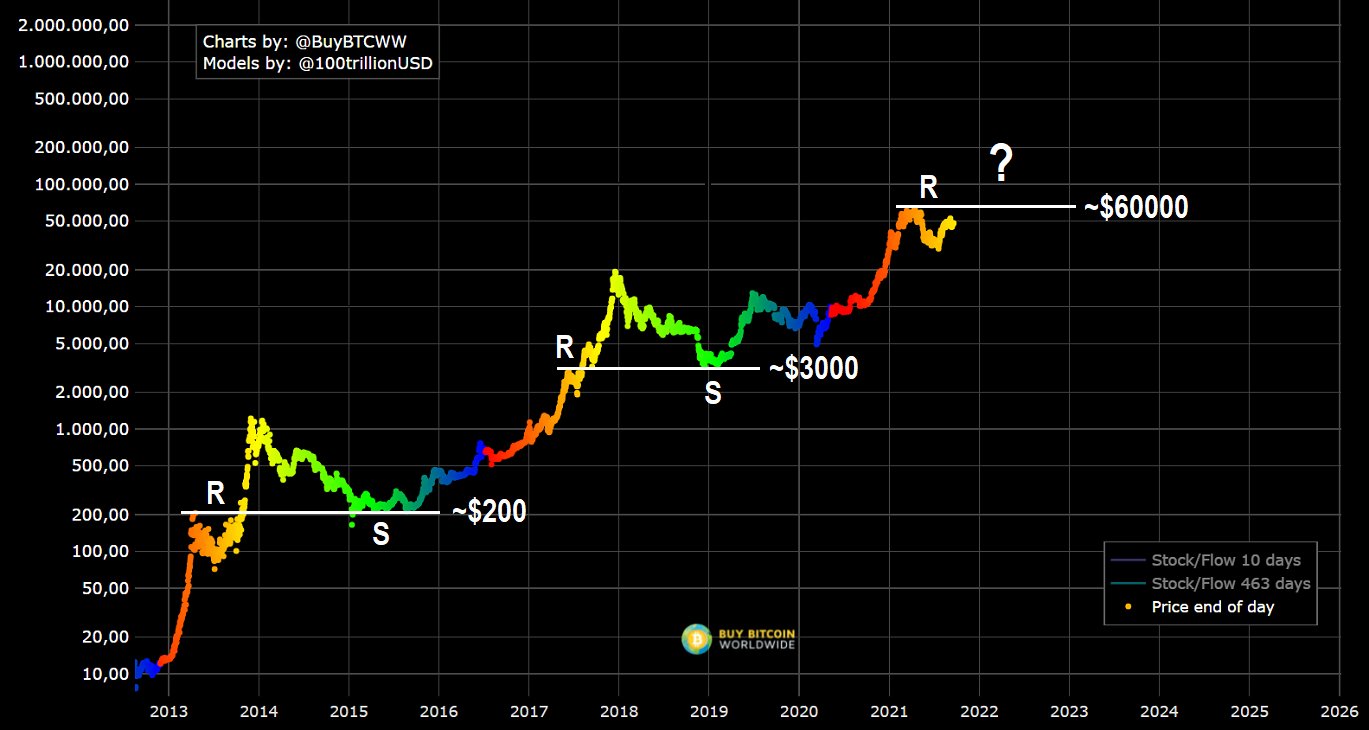 The line represented a barrier during the period of price uptrend. Traders tested it for a breakout multiple times before successfully breaching it to log a new record high. When prices started correcting, they eventually bottomed out near the same line.

In 2020-2021, Bitcoin underwent a similar upside trajectory, bouncing from below $4,000 to rising to above $60,000. Again, Harington highlighted the $60,000-level as the same R/S line that kept trades from logging a clear bullish breakout.

The analyst hinted that Bitcoin would break above it to soar towards a new record price level.

Cointelegraph Markets analyst Michaël van de Poppe reacted to Harington's fractal theory, adding that it would lead the Bitcoin prices to the $250,000-$350,000 range.

He noted, however, that the massive run-up could also prompt a brutal correction that can push Bitcoin prices back toward $65,000, right near the Harington's S/R level of $60,000.

Bitcoin skyrocketed after crashing below $4,000 in March 2020 primarily due to the global central banks' loose monetary policies to curb the economic aftermath of the Covid-19 pandemic. The cryptocurrency closed the year at around $30,000, as retail and institutional investors woke up to its safe-haven narrative against a falling U.S. dollar and rising inflation fears.

So far in 2021, the price of Bitcoin topped around $65,000 before correcting lower below $50,000. At its year-to-date (YTD) low, the pair traded for $29,301 on the Coinbase exchange. Its losses were led by a sudden ban on all crypto activities in China (including mining) and Elon Musk's alarming tweets over Bitcoin's booming carbon footprints. 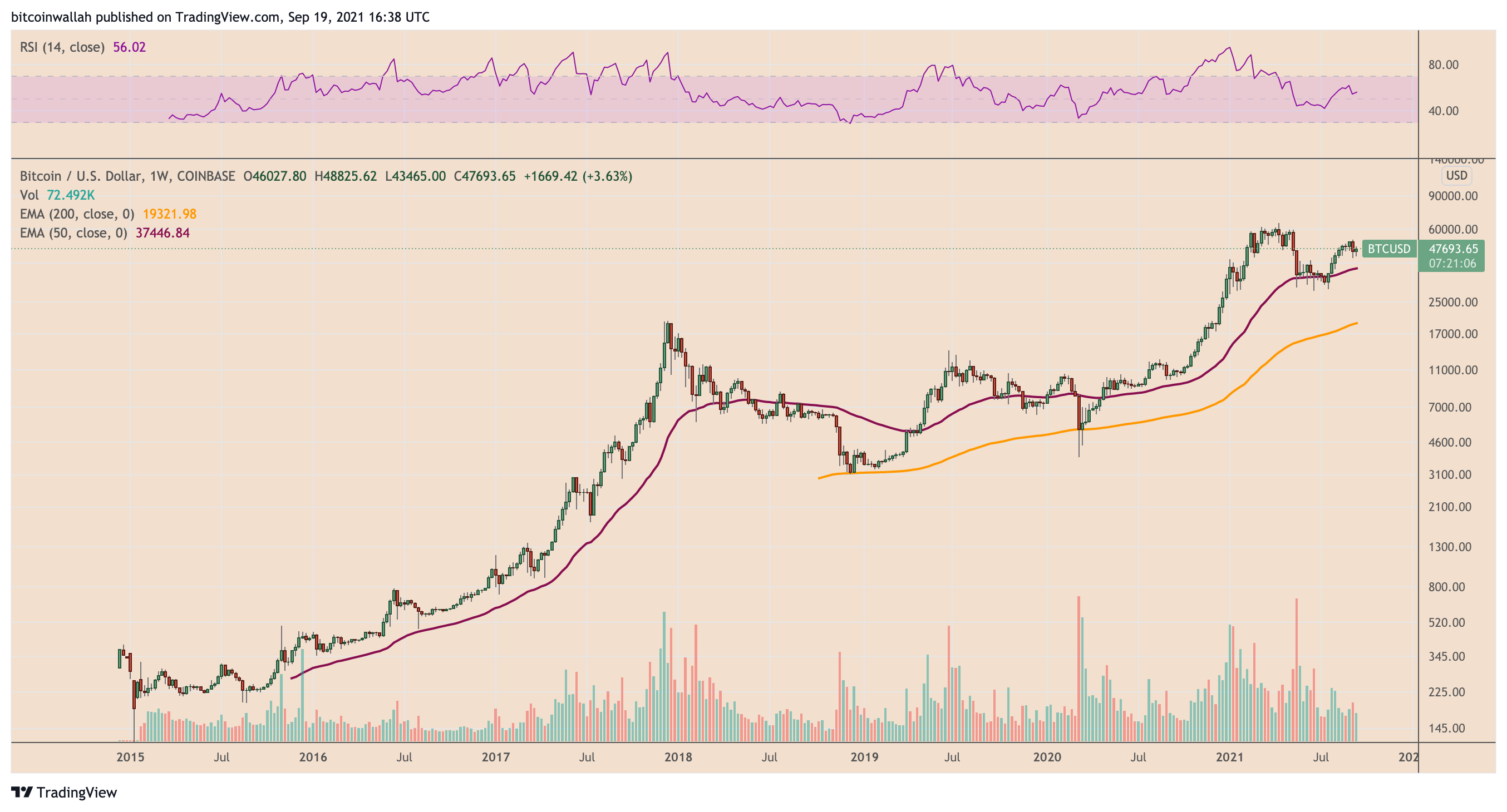 The cryptocurrency held prices above $30,000 as its reserves across exchanges dropped significantly.

Blockchain data analytics service CryptoQuant reported that Bitcoin's balances across the crypto trading platforms slipped to around 2.37 million BTC last week, its lowest in more than a year.

A decrease in Bitcoin reserves represents traders' intentions to hold the cryptocurrency instead of trading it for altcoins and fiat currencies.

Bitcoin's recovery from below $30,000 to almost $50,000 also coincided with its V-shaped hashrate recovery.

For the uninitiated, the Bitcoin network's computation power plunged to 84.79 million terahashes per second (TH/s) in early July from 180.66 million TH/s in late May. The drop surfaced as many miners responded to China's crypto crackdown by either shutting down their facilities or moving their operations abroad. 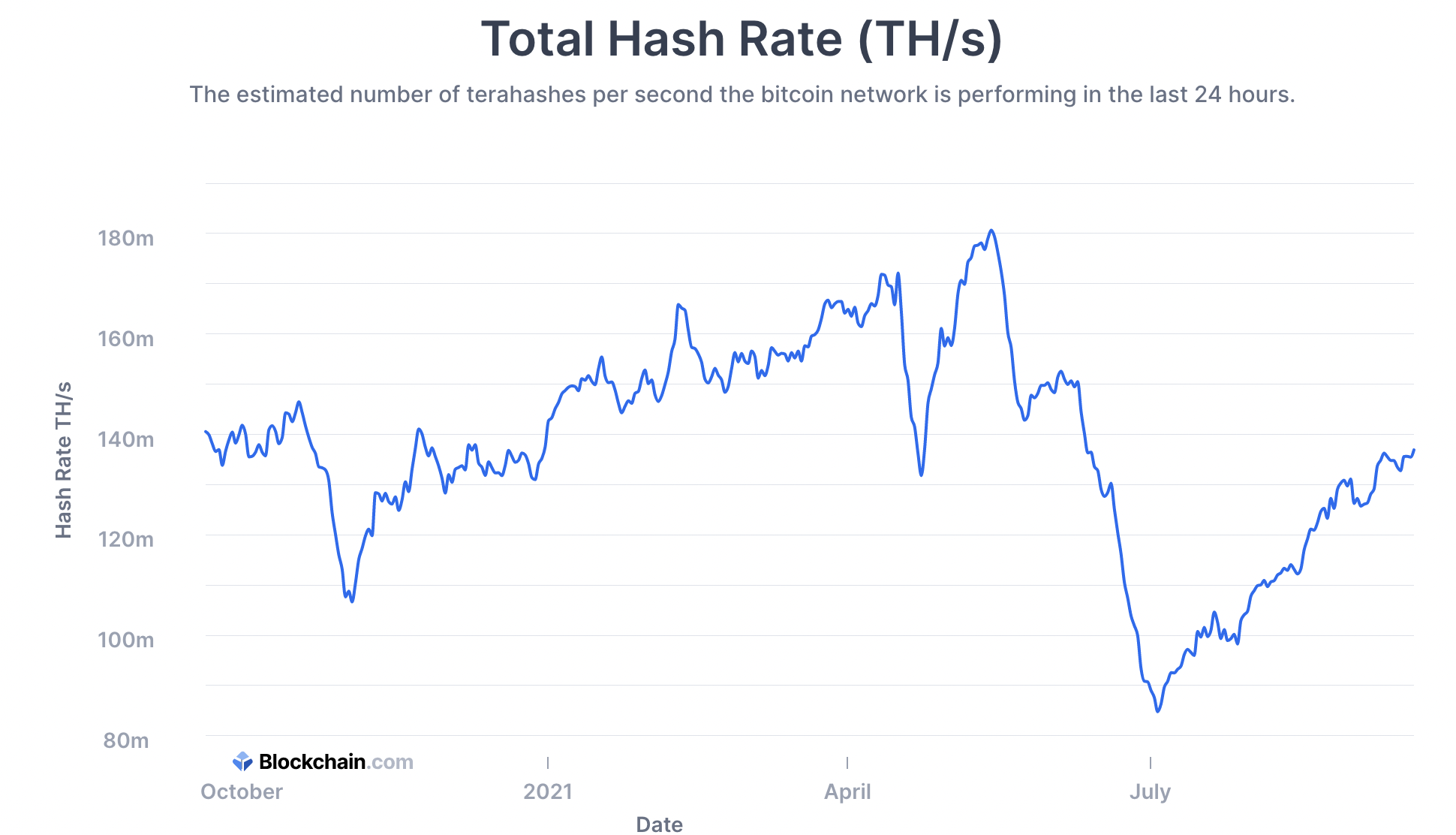 But the network recovered more than half of its lost hashrate, hitting 136.92 million TH/s on Sept. 18, indicating that China's direct ban did not have a prolonged effect on Bitcoin's mining sector.