Bitcoin (BTC) bulls are locked in a battle with bears in order to take control of the $40,000 level and dovish comments from U.S. Federal Reserve Chair Jerome Powell suggest that loose monetary policies will remain in place for the foreseeable future.

Generally, the crypto ecosystem is “cautiously optimistic” about further price rises as the fallout from China’s miner purge begins to subside and displaced miners begin to establish mining operations in other countries, resulting in a rebound of the Bitcoin hash rate.

Data from Cointelegraph Markets Pro and TradingView shows that while the momentum in Bitcoin has slowed down, several altcoins have gained more than 30% on the 24-hour chart, led by THORChain (RUNE), Quant (QNT) and Perpetual Protocol (PERP). 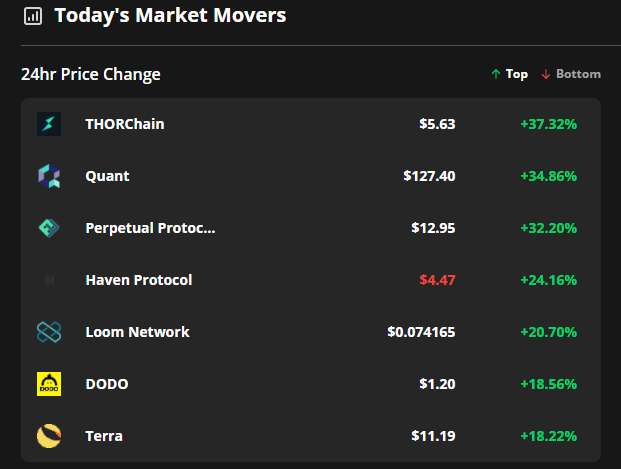 The top performer over the past 24-hours has been THORChain, a decentralized liquidity protocol that facilitates the exchange of cryptocurrencies across multiple networks while allowing the token holder to retain full custody of their assets.

VORTECS™ data from Cointelegraph Markets Pro began to detect a bullish outlook for RUNE on July 24, prior to the recent price rise.

The VORTECS™ Score, exclusive to Cointelegraph, is an algorithmic comparison of historic and current market conditions derived from a combination of data points including market sentiment, trading volume, recent price movements and Twitter activity. 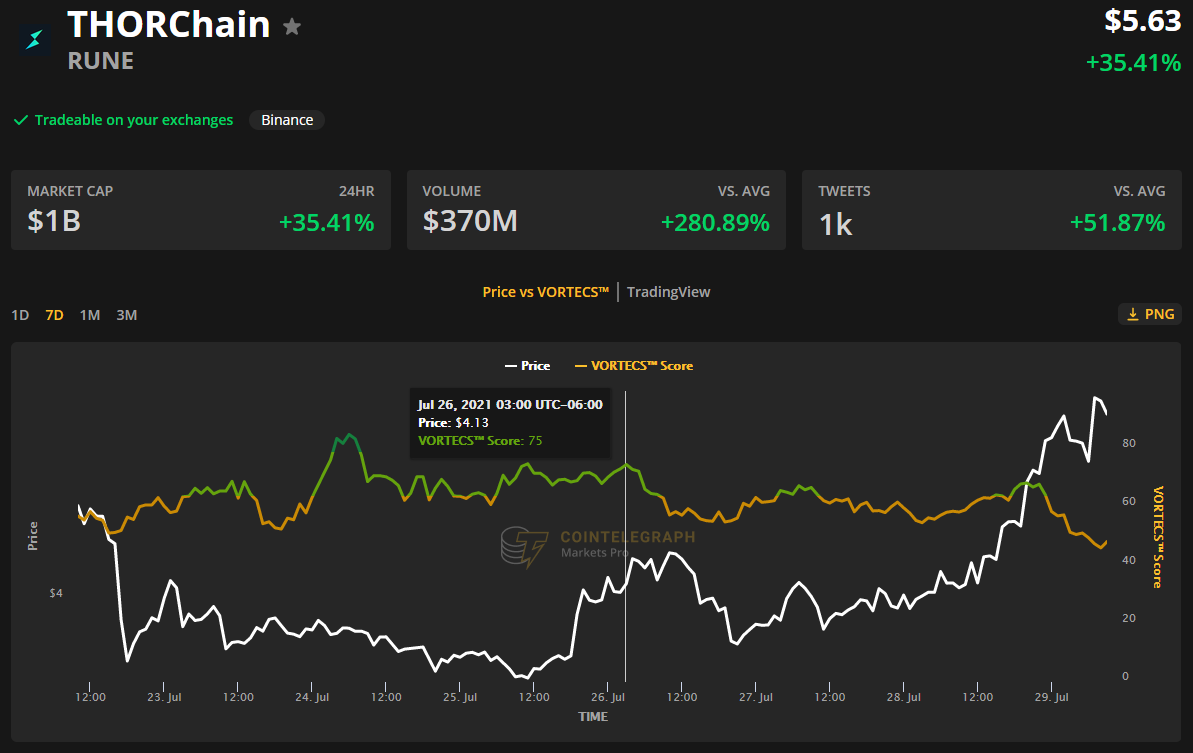 RUNE price has been hammered in recent weeks after a series of protocol exploits resulted in $7.6 million worth of funds being drained from the platform, but it appears as if the fallout from that has now subsided.

The second-largest gainer in the past 24-hours was Quant (QNT), a project focused on interoperability between different blockchain networks.

According to data from Cointelegraph Markets Pro, market conditions for QNT have been favorable for some time. 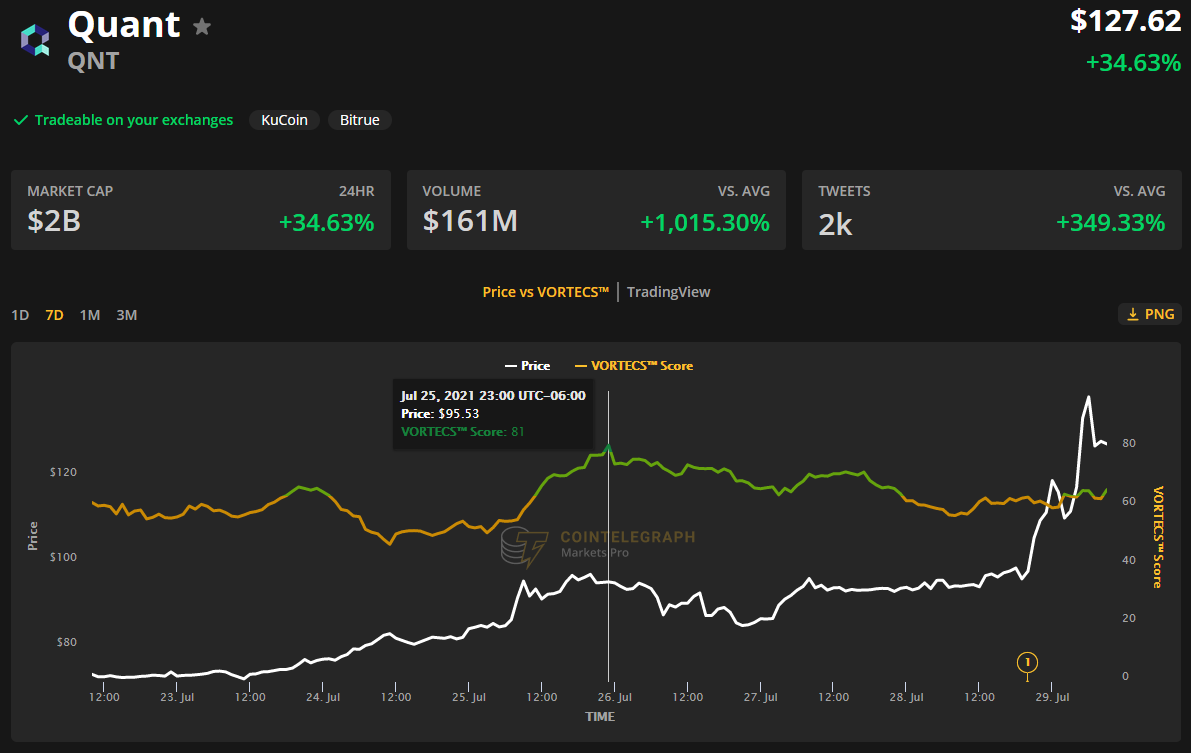 As seen on the chart above, the VORTECS™ Score for QNT began to pick up on July 25 and reached a high of 81, around 24 hours before the price increased 75% over the next two days.

The NewsQuake™ alert system caught the announcement from Binance that it would be listing QNT just before its price began to significantly rise from $96 to an intraday high at $144.75.

Perpetual Protocol, a decentralized perpetual contracts protocol that includes an on-chain DEX and up to10x leverage, also broke out today.

VORTECS™ data from Cointelegraph Markets Pro began to detect a bullish outlook for PERP on July 25, prior to the recent price rise. 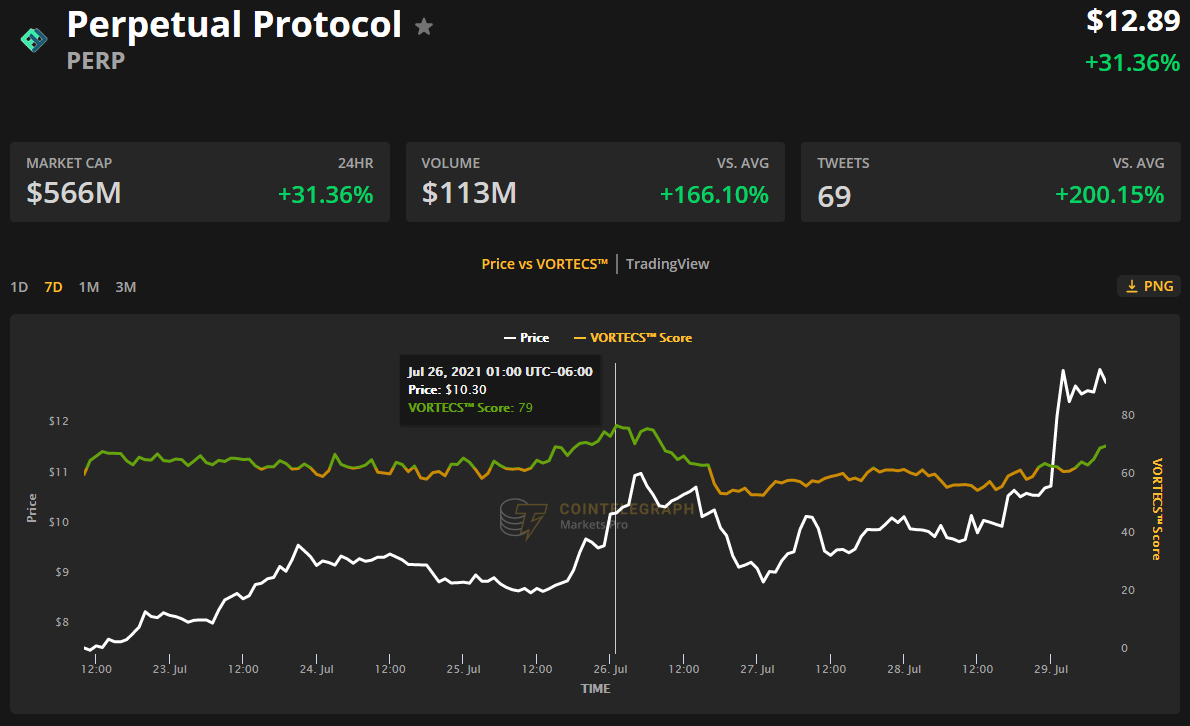 As seen in the chart above, the VORTECS™ Score for PERP climbed into the green on Jly 25 and reached a high of 79 early on July 26, around 24 hours before the price increased by 52% over the next two days.

The building momentum behind PERP comes following the release of Curie, a second version of the Perpetual Protocol.